The deadline for Sacrifice | ذبيحة – Eed Qurbani 2022 orders has passed. We are now taking orders for 2023.

In co-operation with Markaz Quba, we shall be processing all ‘Aqeeqah, ‘Eed Qurbani and Feed the Poor sacrifice requests in Nepal.

Markaz Quba is home to hundreds of orphaned, poor and needy students of knowledge – which increases the benefit to be gained by having your ‘Aqeeqah, ‘Eed Qurbani or Feed the Poor sacrifices carried out there, in shaa.-Allaah.

The ‘aqeeqah is a confirmed Sunnah, and there is no sin on the one who does not do it. That is because the Messenger of Allaah (sal-Allaahu ‘alayhi wa sallam) said:

«Whoever has a child born to him and wants to offer the sacrifice, let him do so; for a boy two similar sheep and for a girl one sheep»

Reference: Transmitted by Ahmad, 20207. al-Haafiz Ibn Hajar said in Fat.hul-Baaree: ‘Its isnaad is strong.’ It is classed as Hasan by al-Albaanee in Saheeh Sunan Abee Daawood, 2788.

The Messenger of Allaah (sal-Allaahu ‘alayhi wa sallam) said:
«The people of each household should offer an [‘Eed] sacrifice every year»

The Prophet Muhammad (sal-Allaahu ‘alayhi wa sallam) said:
«Whoever can afford it but does not offer a sacrifice, let him not come near our place of prayer»

Reference: Classified as Hasan-Saheeh by at-Tirmidhee in his Sunan, no.1855

The Prophet Muhammad (sal-Allaahu ‘alayhi wa sallam) said:
«Worship the Most Merciful, feed the poor, and spread peace. You will enter Paradise in peace.»

Reference: Transmitted by al-Bukhaaree, no.5058

Shaykh Ibn ‘Uthaymeen was asked: What is the correct opinion regarding the sacrifice [of ‘Eed al-Adh.haa]?

The Shaykh responded: That which is apparent to me is the sacrifice is not obligatory. However, it is a highly recommended Sunnah, and is [therefore] disliked for one who is able [to offer it] to abstain from doing so.

The Shaykh responded: It is better to sacrifice the udh.hiyah at home in the presence of his family, [locally] in his country – that is better, and if it is slaughtered [abroad on his behalf] here, then there is no harm [in doing so]. 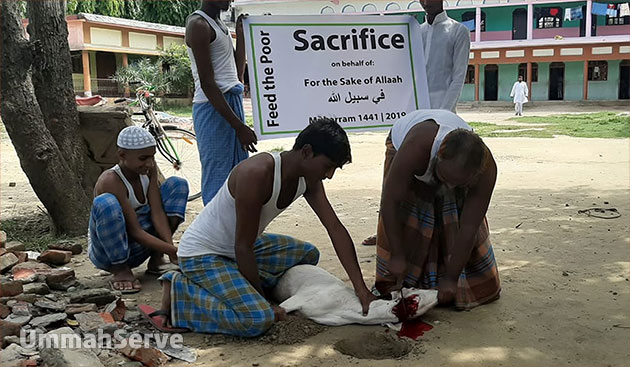 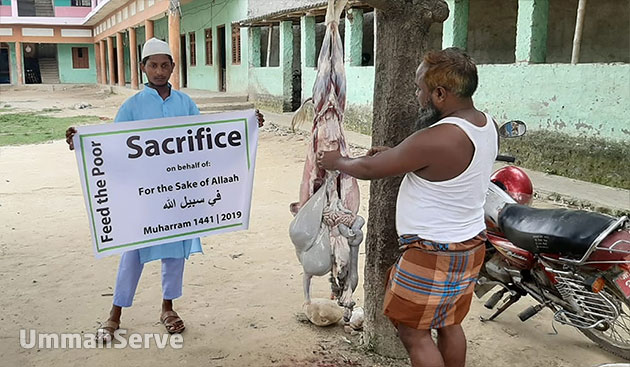 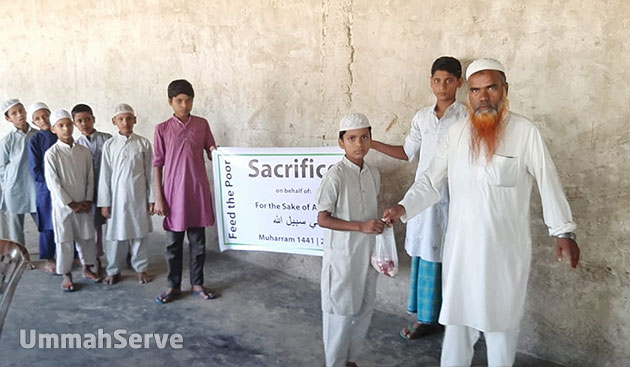