The Ministry of Hajj and Umrah announced on Saturday that Saudi Arabia will increase this year’s Hajj capacity to 1 million pilgrims.

The ministry said this decision would be implemented in line with full safety guidelines based on the government’s concern for pilgrims’ safety and the well-being of those visiting the Grand Mosque and the Prophet’s Mosque.

According to the press release, the Kingdom is keen to maintain the continuity of Hajj without any interruptions and to enable the largest number of Muslims around the world to fulfil their religious duties.

The ministry clarified that pilgrims should be under 65 years of age according to the Gregorian calendar, and are required to have full immunization with the basic doses of an approved COVID-19 vaccine.

Those attending from abroad must submit a negative PCR test for COVID-19, using a sample taken within 72 hours of departure to Saudi Arabia.

The Ministry of Hajj and Umrah stressed that pilgrims must adhere to preventive measures and follow precautionary instructions while performing their Hajj duties to ensure their health and well-being.

Mohsin Tutla, chairman of the World Hajj and Umrah Care Foundation, said he was overjoyed and overwhelmed at the news.

“So much to do in such little time, but I am certain every stakeholder belonging to the professional Hajj community shall rise to the challenge and help the 1 million pilgrims fulfil their dreams,” he said.

He added that everyone in the sector knows what to do. “Special guidance and guidelines from the Ministry of Hajj and Umrah will underpin the success of Hajj 1443 (2022); welcoming international pilgrims to Hajj after two years shall be a monumental occasion, providing a great sense of relief and hope.”

Because of the COVID-19 pandemic, last year’s Hajj was restricted to just 60,000 pilgrims, all coming from within the Kingdom.

Endang Jumali, Indonesia’s Hajj and Umrah consul in Jeddah, told Arab News that he was very happy when he received the news from his colleagues in the Ministry of Hajj and Umrah.

“This capacity (increase) gives us more confidence to set the preparation from our side in Indonesia. I would like to fully thank King Salman and Crown Princes Muhammad Bin Salman, and hope Allah will bless all of us and give us the strength to start the preparation for Hajj.”

Abrar Mirza, Hajj director general in Pakistan, told Arab News that the announcement is good news for all Muslims, adding that everyone was waiting anxiously to see pilgrims back in Makkah and Madinah.

He said Muslims should appreciate the wise strategy adopted by the Saudi leadership to restore the Hajj gradually without putting human lives at risk.

“The professionals engaged in this process must have worked tirelessly. Their efforts must be commended across the board. The vision of the leadership supported, by a wise strategy and tireless efforts has given its results. Now, we Pakistanis are looking forward to performing Hajj with our sisters and brothers from all over the Muslim world,” he said. 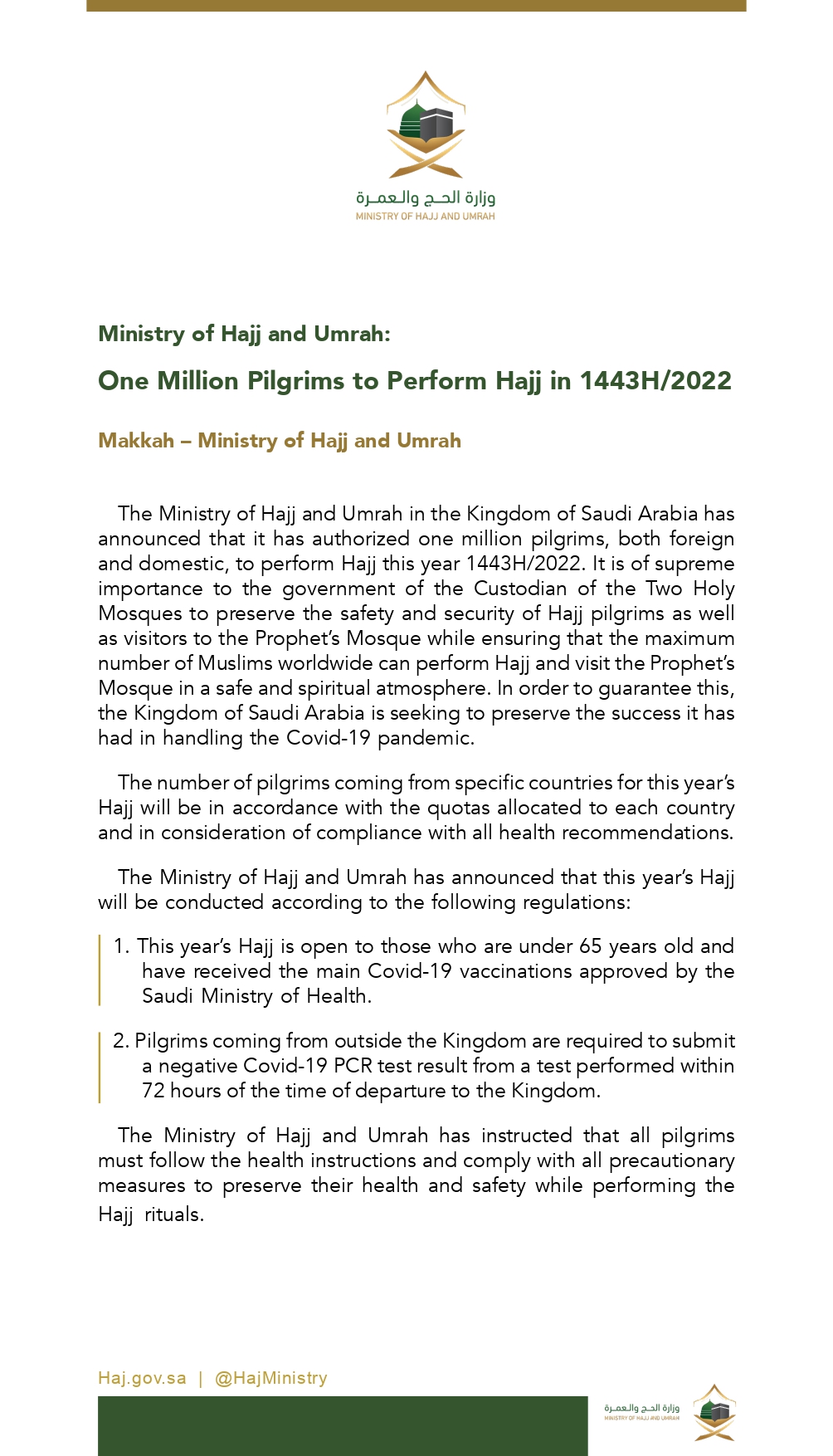